YIT brings openness to the housing markets in Prague and Bratislava

YIT is better known in the Czech Republic and Slovakia than ever before. The company has several major projects underway in both countries. YIT has also brought Nordic openness to housing project planning.

Over the past ten years, YIT has reached a solid position in the Czech and Slovak housing markets. The company’s subsidiaries in the countries are YIT Slovakia in Bratislava and YIT Stavo in Prague.

“We are among the top three housing developers in the area. Our company is known for its high quality and reliability,” says Milan Murcko, General Director of YIT Slovakia.

In terms of revenue and the number of apartments and residential start-ups, the company is among the top five. The high quality has been recognised with awards. The company has won the Developer of the Year award four years in a row. Nearly every completed project has also won the Housing Development of the Year award.

Major projects in Prague and Bratislava.

A good reputation and stable position have helped the companies secure good plots and sites in the capital cities of both countries, Prague and Bratislava.

This year, YIT began a major area development project in Prague. The first phase of the Aalto Cibulka project will see around 240 apartments completed by summer 2019.

Murcko is especially pleased with the strengthening of the company’s position in the Bratislava market. The second phase of the project in the old Stein brewery area is already set to begin this year. A new project is the Cvernovka cotton factory, located in a central area of the city.

“Both sites are home to a protected historical building. It is important for old, well-known buildings to be preserved and used in a way that benefits residents. This way, we can breathe new life into valuable properties,” says Tom Sandvik. Sandvik is the head of YIT’s Baltic and Central Eastern Europe division.

YIT’s new construction and renovation projects are of particular interest to young singles, young families and small-scale investors. Mortgage interest rates are at a low level, which encourages people to purchase owner-occupied housing.

“Our typical customer is a man or woman in their 30s who has just graduated from university and wants to settle down. They already have an established job, and because renting an apartment would be as expensive as paying off a loan, they decide to purchase their own,” says Renáta Zatková, Marketing Manager at YIT Slovakia.

For a young family, an apartment is the biggest investment of their lives. They want a functional family apartment, in which the environment, neighbourhood and safety of the area play a major role. Services must be located close to home.

Small-scale investors want new, modern apartments. They purchase one or two apartments they believe will remain at a high value.

“Investors want apartments that are easy to rent or resell. The most important things for them are the price and a good location,” explains Zatková.

According to Zatková, the most important marketing channels for reaching customers are apartment portals and other websites focusing on apartments. Social media has become an important tool for reaching the right customers quickly.

Practice has shown that Finnishness is an asset in the CEE housing markets. Finland is associated with a welfare society, high quality and caring about the environment, among others.

“When marketing our apartments, we talk about Finnish nature, traditions, food, architecture and design. These topics are of interest to people especially on social media,” Zatková says.

YIT projects are often given a Finnish name. This is a good way to stand out in the market.

The majority of YIT’s projects in Prague and Bratislava are located in central places that are important to city residents.

The old Stein brewery area in Bratislava is an example of a typical renovation project: A historical industrial property, in an excellent location with good transport connections, that can be turned into a residential area.  The old industrial building will be renovated, and new apartments will also be built in the area. This way, an area well known to the city residents opens up to everyone and acquires a new meaning. Larger development areas also include separate business spaces.

“When carrying out ecological urban building, it makes sense to also build services. This reduces the need for transport and makes the area more functional and comfortable for everyone,” says Sandvik, summing up.

When it comes to construction, there are no major differences between here and the Nordic countries. Sandvik praises the local facade architecture. Building systems are slightly behind when compared to Finland. For example, heat recovery is not yet done here, but cooling would be necessary in the summer. In some more expensive projects, cooling is installed either as a standard or additional feature.

“But parking is always built underground. It’s expensive, but on the other hand, the living environment is always more comfortable then,” Sandvik continues.

Complicated bureaucracy and an unpredictable permit process are typical in both the Czech Republic and Slovakia. This slows down the start of work. YIT, for its part, has wanted to renew development practices.

Discussions about new projects are held well in advance with various stakeholders, the authorities, neighbours and environmental organisations.

“We have brought with us a new, more open way to develop areas. Traditionally, some projects have even been approved in secret. We have turned this practice upside down,” says Sandvik.

The overhaul of procedures has been well received overall. After all, everyone is working toward the same goal: to carry out sustainable urban building and thereby create a better environment for everybody.

According to Milan Murcko, General Director of YIT Slovakia, Prague and Bratislava have very similar markets in terms of both challenges and opportunities. The permit process in Prague may be even a bit slower than in Bratislava.

For the time being, Murcko does not see operations expanding to provinces or other large cities. Resources are limited and should not be spread too thin.

“For the next two years, we will focus on Bratislava. The market is excellent and our current projects are strengthening our position in the market for completed and sold apartments, too,” says Murcko.

The second and third phases of this major area development project in Prague are currently in progress. About nine hectares in size, the residential area will see a total of nearly 900 new apartments built by 2024.

Around 250 apartments will be completed in the first phase. The project is located in Prague’s fifth district near the city centre and good transport connections. The regional development project, to be completed in 2–3 phases, includes over 400 apartments and has an overall value of over EUR 80 million.

Plot in the 11th district

YIT has acquired a new plot for residential construction in Prague. A total of 50 apartments will be built on the plot, with construction set to begin in autumn 2017.

A new project is the former Cvernovka cotton factory, located in a central area of the city. The area is located within walking distance of the downtown core and the bank of the River Danube.

The second phase of the project in the old Stein brewery area is already underway. Altogether over 400 apartments and 30 retail spaces will be built in the 1.7-hectare residential area by 2020.

The Nuppu Lilja and Nuppu Tulppani apartment building areas are located around ten minutes from the centre of Bratislava.

The first phase of 110 apartments will be complete by the end of 2017. The project includes over a thousand apartments and its overall value is over EUR 100 million. The project, which is being built in ten stages, is YIT’s largest area development project in Slovakia. 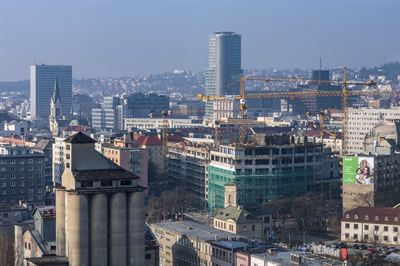 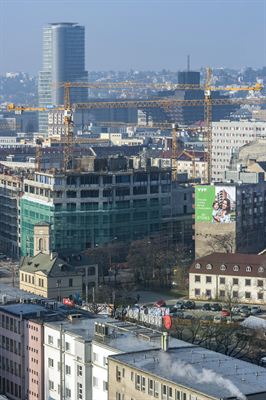