For supervisor Tero Seppänen, the man in charge of the construction of the Helsinki Central Library Oodi, the project has been the most challenging of his 20-year career – but also the most rewarding. The construction has been characterised by tailored solutions, such as the library’s supporting steel arches and the top floor’s full glass facade, which can only be achieved through close cooperation.

The Helsinki Central Library Oodi construction site office on Töölönlahdenkatu is a three-storey building. The site management includes approximately twenty clerical workers, and the facilities are a hive of activity. YIT’s head supervisor Tero Seppänen has arrived at the site for the evening shift.

Oodi will open to the public in December. It is estimated that it will attract approximately 10,000 visitors per day, or 2.5 million per year.

Seppänen has worked as a construction site supervisor for more than 20 years. He likes to refer to Oodi as a ‘house’. For a builder, all projects are houses, regardless of their size or construction time. The cooperation between different actors – such as the City of Helsinki, the architects, the electrical, heating, plumbing and air conditioning planners as well as YIT’s builders – has been facilitated by comprehensive advance planning.

“The construction of Oodi has been divided into smaller steps, which makes it easier to make sense of the whole.”

Oodi was assigned the demanding AA category in the construction requirement category. According to Seppänen, the architects have designed many original, almost unique solutions for the building.

For example, there are no pillars in the downstairs area of the Central Library supporting the building. Instead, the whole building rests on two steel arches. The span of the arches is approximately one hundred metres.

“Solutions such as this are well known to infrastructure projects, especially bridges, but they are rarely used in buildings. As far as we know, they have not been used in any other buildings in Finland,” says Seppänen.

The arches are composed of eight metal box girders welded together. The hollow girders were transported to the construction site via Kansalaistori. The largest of them weighs 86 tons. For comparison’s sake, the prefabricated units most commonly used on construction sites weigh approximately 8–10 tons.

The steel theme is also repeated in the spiral staircase, which was delivered to the site in 10 blocks. The black staircase is designed to move with the building. Oodi’s structures are designed to last for 150 years, and the facade for 50 years.

In the glass facade of Book Heaven, even the pillars are made out of glass

According to Seppänen, no compromises have been made with regard to the architects’ plans for Oodi; on the contrary, every attempt has been made to remain faithful to them. In total, the facade of Book Heaven on the top floor comprises approximately 4,000 m2 of glass surface. A light mist has been spray-printed on the surface of the glass.

“The structures of the glass facade are supported by four glass pillars that have been glued together. In a glass facade, you would normally use a support frame made of aluminium or steel that is clearly discernible from the glass structure.”

If you listen to Seppänen, what makes the glass facade particularly challenging is that there are only a few people in Finland with the necessary skills to handle glass in this fashion.

“The designers at the glassworks designed the prefabricated units of the facade, and at YIT we figured out the implementation. We have also used a third party to verify that the structure is sufficiently safe for use in a public space. Personal safety is the number one starting point in structural design,” he explains.

The facade for the lower floors, on the other hand, is specially sawn spruce from central Finland.

“The timber is radial-sawn. Normally, the wood fibres in boards curve horizontally, but in radial-sawn boards, they travel vertically. Not only does this make the wood longer lasting, it also prevents the board from bending with time,” continues Seppänen.

YIT started the construction of the Central Library in September 2015. By now, approximately 2,000 people, 150 contractors and 200 designers have worked on the site, including foundation work. This autumn, work has continued in two shifts in order to stay on schedule. The supervisor expresses his thanks to those who have taken part in the construction of Oodi, especially for their efforts to work together towards the common goal.

“No one constructs buildings like this on their own,” says Seppänen.

The Big Room operating model, which brings all of the professionals engaged in the project around the same table every Thursday, was adopted almost on day one of the project. At each meeting, the group is divided into smaller groups that work to find solutions to four to eight different issues. At the end of the day, the proposed solutions are handed to the customer, the City of Helsinki, for approval.

“The Big Room model makes it possible to identify problems and handle them together, avoiding an avalanche of e-mails. At the same time, the competence of all actors is utilised to the maximum, and the understanding of specific technical expertise or architecture is increased,” Seppänen adds.

“A project like this requires team work. We older hands have the responsibility for training the next generation of building professionals, and we do this by setting an example.”

Out of the facade of Oodi protrudes an enormous peak that extends 14 metres from the library site and into a park owned by the city. On the peak rests a 1,000 m2 Citizens’ Balcony. Seppänen is standing on the balcony, deep in thought.

“It’s hard to know beforehand what the atmosphere here will be like or whether people will find their way here. But it’s easy to find meaning in your own work – Oodi will become a meeting place for people.”

The interview of Tero Seppänen is a part of a three-part series of articles on Oodi.
Read the article published before: Oodi´s architecture is a fusion of action and timelessness

Approximately 2,000 people in total have worked on the Oodi construction site.

Boasting three floors above ground, the building has a total floor area of approximately 17,000 m2 and a volume of slightly below 110,000 m3. The area of the Citizens’ Balcony on the top floor is approximately 1,000 m2.

It is estimated that approximately 10,000 people will visit Oodi on a daily basis, or 2.5 million per year.

The construction started in autumn 2015, and the opening ceremony will be held in December 2018. 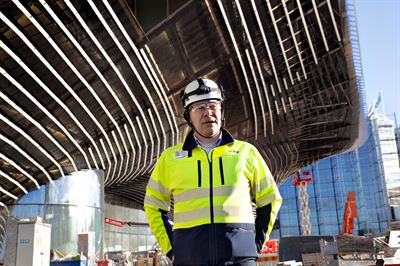 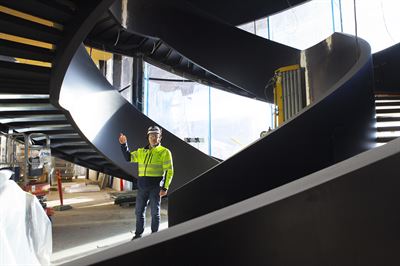