YIT’s Capital Markets Day (CMD) for investors and analysts will be organised in the Finnish Nature Centre Haltia, Espoo, Finland constructed by YIT today, September 28, 2017 and it will deal with topical issues such as the Partnership Properties segment to be established at the turn of the year, as well as the current situation in respect of the proposed merger with Lemminkäinen.  Changes to strategy or financial targets will not be disclosed.

YIT announced on June 19 a decision to establish a new Partnership Properties segment at the turn of the year. The new segment will focus on financing the initial phases of major development projects and on the ownership and subsequent realisation of the developed properties at the right moment. In accordance with its strategy, YIT aims to make a significant part of large and long-term investments with partners.

According to current plans, we will report the ownership of the Mall of Tripla, Tietotie 6 and E18 Hamina-Vaalimaa motorway projects, among others, under the new segment. The total value of the holdings to be reported under the segment is approximately EUR 1,000 million. The new operating model changes, according to current plans, the reporting policy for jointly-owned projects during the construction and at the time of completion. In addition, the operating model also allows the creation of an ownership-based cash flow business. In the long run, YIT’s aim is to continue its practice of selling its holdings to final investors at the time it sees fit. Investments in projects are carried out according to the financial targets determined by Group.

The preparation of the merger with Lemminkäinen has progressed according to the schedule published on June 19. The Extraordinary General Meetings of both companies gave their approvals for the merger plans in September. The proposed merger still needs the approval of the competition authorities. At present, integration planning is in full swing to the extent allowed by law.

In the Housing Finland & CEE segment, the growth in consumer sales has remained good and the outlook is bright. We estimate the consumer housing sales volume in Finland in the third quarter to reach over 450 (Q3/2016: 291) and in the CEE countries over 200 (Q3/2016: 201) apartments. At the Capital Markets Day, we will disclose for the first time the development of the housing revenue in the CEE countries.

In Russia, we estimate that the low point of the economic cycle is now behind us, but housing demand is anticipated to improve slowly and price levels remain low. In the Housing Russia segment, the focus is on reducing the amount of capital invested in Russia by RUB 6 billion through housing and land sales by the end of 2018 from the 6/2016 level and on improving profitability. We estimate that the housing sales volume in the third quarter will reach over 700 (Q3/2016: 880).

In the Business Premises and Infrastructure segment, major projects are proceeding as planned and the order backlog remains strong. There are many interesting projects at the tendering stage in the segment. The business premises rental business has been very successful in the past twelve months.

The guidance for 2017 was raised in July and it remains unchanged (segment reporting, POC):

Group revenue is estimated to grow by 5–12 per cent.

The adjusted operating profit is estimated to be EUR 105–115 million.

Adjusted operating profit does not include significant restructuring costs, impairments or other items affecting comparability.

The Capital Markets Day programme starts today, September 28, 2017, at 9 a.m. local time. The presentations can be followed live on YIT’s website at www.yitgroup.com/webcast.  During the presentations, investors and analysts can also post their questions using the chat feature.

Further information about the Capital Markets Day is available on YIT’s website at www.yitgroup.com/cmd.

The YIT shares to be issued in connection with the merger of YIT and Lemminkäinen have not been registered under the U.S. Securities Act of 1933, as amended (the “Securities Act”) and are being issued in reliance on the exemption from registration set forth in Rule 802 under the Securities Act. 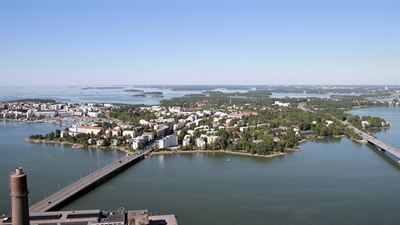 YIT begins the construction of the Keilaniemi underground parking facility