YIT and Are to build the Soukka metro station in Espoo, Finland

A consortium formed by YIT and Are and Länsimetro Oy have signed an agreement on the construction of the Soukka station on the West Metro line in Espoo, Finland. The value of the contract is approximately EUR 50 million, whereof YIT’s share is approximately EUR 35 million. The contract includes constructing the Soukka metro station building with landscaping and technical shafts as well as the tunnel station and service tunnels. Additionally, an underground air-raid shelter will be built. The construction will begin in August 2018 and is scheduled for completion in February 2022. The project is booked in YIT’s order backlog in the second quarter of 2018.

”We are happy to participate in further development of Espoo, also with building the metro. In the Soukka metro station construction project we can benefit from our previous experience of the four stations that we have built for the West Metro. For instance, when building the Aalto University station, we took in use several innovative methods to improve project management,” comments Anne Piiparinen, Senior Vice President of Industrial and Structural Engineering of YIT’s Infrastructure construction segment.

YIT is the biggest single constructor of the West Metro. For Phase 1 of the West Metro, YIT has built the Aalto University, Tapiola, Niittykumpu and Matinkylä stations as well as done excavation work for tunnels and stations in Ruoholahti, Lauttasaari, Koivusaari, Keilaniemi, Otaniemi, Urheilupuisto, Niittykumpu and Matinkylä. At the moment, YIT is doing excavation and enforcement work for the Finnoo metro station; the work is due for completion in summer 2018.

The West Metro is extending west from Matinkylä to Kivenlahti, Espoo. A rail line comprising seven kilometres and five new stations is being built: Finnoo, Kaitaa, Soukka, Espoonlahti and Kivenlahti.

YIT is the biggest construction company in Finland and a major player in Northern Europe. We construct and develop apartments, business premises and entire residential areas. Furthermore, we are specialists in infrastructure construction and paving. Together with our customers, our 10,000 professionals create increasingly functional, appealing and sustainable cities and living environments. We have operations in 11 countries: Finland, Russia, Scandinavian and Baltic countries, the Czech Republic, Slovakia and Poland. The new YIT was created by the merger of YIT Corporation and Lemminkäinen Corporation, both over 100 years old, on February 1, 2018. In 2017, our pro forma revenue totalled more than EUR 3.8 billion. YIT Corporation’s share is listed on Nasdaq Helsinki. www.yitgroup.com. www.yitgroup.com 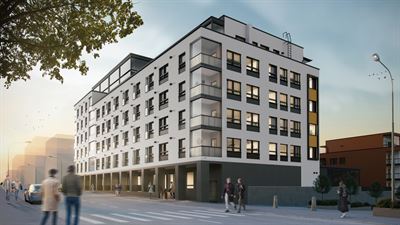