YIT paid a visit to the New World for the first time in a long while following the announcement of our Q3 results and the new strategy. A lot has happened since our previous visit to North America a year and a half ago. The midterm elections were an interesting time to travel, and there was a lot of political discussion all around. The spirit of the meetings we had on the other side of the pond was positive. In particular, our new strategy and the merger provoked a lot of discussion and interest.

The strategy we presented at the Capital Markets Day, “Performance through cycles”, describes the direction of our growth: urban development and non-cyclical businesses. Investors are interested in the importance of each area and segment, now and in the future. While we have not provided precise revenue figures for non-cyclical businesses, but based on 2017 pro forma figures, the Paving segment (including road maintenance), renovation, living services and other service businesses represent nearly one billion euros in combined revenue. The strategic priorities, which are the drivers of growth and structural profitability, do not include the traditional tender-based business contracting business, which also accounted for about one billion euros in annual revenue, as we have not set growth targets for that area. In competitive contracting, we only have internal profitability targets.

One question we were often asked in the meetings was “What are they missing?”. That is to say, what is the market failing to understand? As we emphasised at our Capital Markets Day, YIT is not only a residential company. Business Premises and the Partnership Properties segment will play a prominent role in the last quarter of the year due to the planned sales of office properties and next year due to the completion of the Mall of Tripla. Next year, the Business Premises segment will accumulate revenue and profit from office projects that are currently in the sales stage (and soon to be sold according to our plans) based on their percentage of completion of construction/renovation.  When the deals have been closed, profit on sales for joint ventures will be shown in the Partnership Properties segment and the income statement item “Share of results of associated companies and joint ventures”. No revenue will be recognised from the properties under joint ownership. For office properties that are wholly owned by YIT, the profit and revenue from both the sale and the project are reported under the Business Premises segment.

The diagrams below illustrate YIT’s various roles in the Mall of Tripla project. The Mall of Tripla will be completed in the first quarter of next year. Once the Mall of Tripla is completed, the Business Premises segment will be able to recognise revenue corresponding to YIT’s ownership share (38.75%) of the design build contract (total expenses of approximately EUR 600 million, including the value of the land) that has thus far been accumulated on the balance sheet. Following its completion, the Mall of Tripla will start to generate rental income and it can be appreciated at fair value. YIT has the possibility of reducing its ownership to 20 per cent from the current level of roughly 40 per cent. The entire share of ownership can be sold in 2022 or thereafter. Rental income, potential sales gains and fair value changes will be reported under the Partnership Properties segment. The Mall of Tripla is a good example of YIT’s joint ventures and the Group’s various roles in them.

In conjunction with our interim report, we indicated that consumer housing demand remains strong. However, since last spring, there has been a clear decline in demand in one important customer group. The number of private buyers of investment apartments has decreased substantially. Our goal is still to maintain construction volume at a good level, to the extent that our resources allow, but we will shift the focus of sales more towards institutional investors. 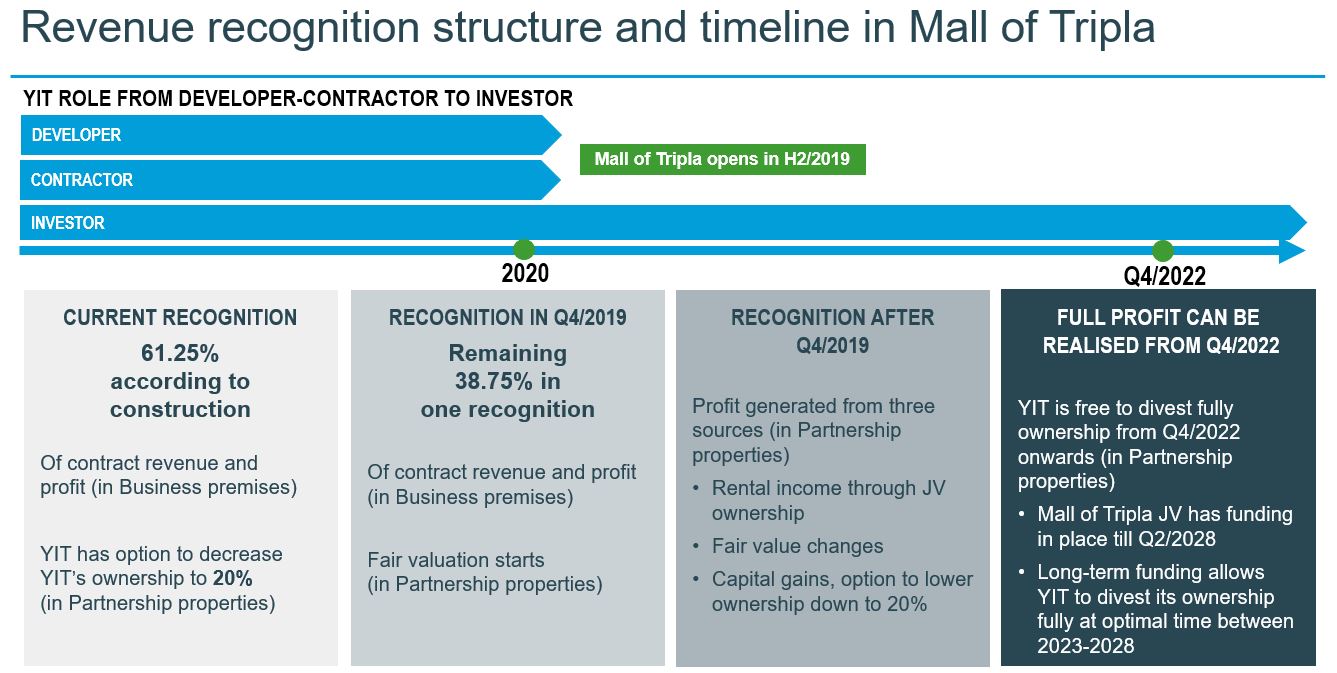