YIT and Lemminkäinen to combine – FAQ

The YIT shares to be issued in connection with the merger have not been registered under the U.S. Securities Act of 1933, as amended (the “Securities Act”) and are being issued in reliance on the exemption from registration set forth in Rule 802 under the Securities Act.

2. What are the benefits of the merger?
a. The businesses of the companies complete and balance each other. In the end, there is little overlapping functions. Also the geographical distribution is balanced out through the company to be formed.
b. At the moment the greatest impediment to growth has been the lack of talent. In the new company, there would be approximately 10,000 professionals.
c. Larger size creates a better foundation from a financing point of view, resulting in projects being commenced more easily together than as separate companies.
d. Larger size also enables specialization and agility, since smaller units or start-up hubs can exist within a large organization.

3. Why does the combination take place now?
a. The owners of both companies have similar interests. Both companies are looking to enhance growth and means for creating a stronger company.
b. Both companies’ have been streamlining business, focusing on profitability and strengthening the balance sheet, and are now in a suitable phase for the next strategy step: growth.
c. Furthermore, the financial position of either company has not supported the merger in recent years.
d. Availability of resources has been a bottle neck recently and competition for talents is tough. We believe that together we are more attractive as an employer.

4. What are the detailed sources of announced EUR 40 million synergies and when those are expected to be reached?
a. After the merger there is only one listed company. In the future audit, insurances, Board of Directors, top management etc. are required for only one company and the need of office space can be evaluated.
b. Development of IT systems is expensive. In a company of larger size we obtain more benefits from IT systems projects and so called scale benefits, when the same system can be used by more users.
c. There are possibly some overlapping functions in group functions and a few regional units. If the combination takes place, it is rational to review the best practices, needs for combining, operational model uniformity and use of common tools.
d. However, a significant part of the synergies comes from the fact that we believe to be able to speed up growth due to stronger financial resources and, among other things, accelerate the rotation cycle of YIT's plot reserve by utilizing new resources on site. Integration of operations will be initiated as soon as possible after the proposed merger is implemented, and the synergies are expected to materialize in full by 2020.
e. We expect integration costs of approximately EUR 40 million to have a nonrecurring cash flow impact for the years 2017–2019.

5. What is the proposed name of the combined company?
a. The company is proposed to be named YIT Corporation (YIT Oyj).

6. Where will the headquarters be situated?
a. This is a topic that the integration team will evaluate.

7. Please describe the financing plan?
a. YIT has obtained a commitment for financing of the merger from Nordea and Danske Bank. The new financing arranged in connection with the combination consists of a EUR 240 million Bridge Term Facility, available from the completion date of the merger. The bridge facility has a maturity date falling twelve months after the signing of the Bridge Term Facility agreement, but includes a continuation option of six months. In addition to the above, YIT is planning to arrange for the combined company a Revolving Credit Facility to correspond to the financing needs of the combined company. YIT's current revolving credit facility agreement is in force.

8. Is the completion of the merger certain?
a. Completion requires that at least two thirds of the votes cast and of the shares represented at both companies’ EGMs (that are planned to be held on September 12, 2017) will support the merger and that the required approvals by competition authorities are obtained and that the other conditions to completion of the merger set out in the merger plan are fulfilled.
b. In case the EGM of either company does not approve the merger, YIT and Lemminkäinen will continue as individual companies going forward as until now. 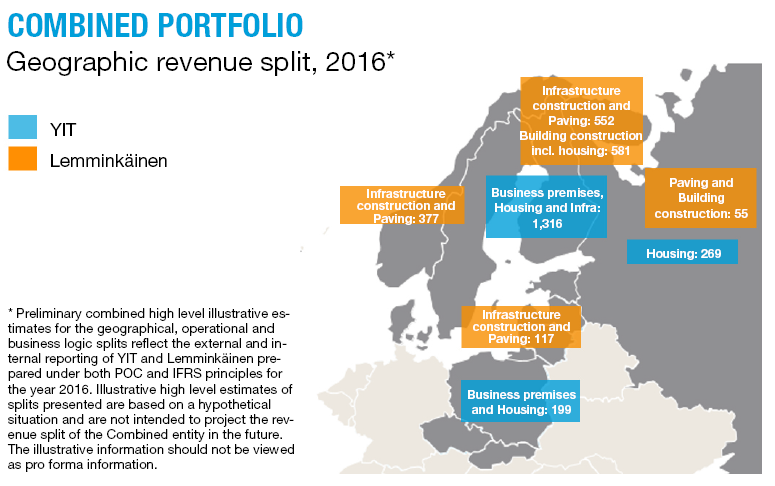 13. What is the timeline for the merger?
a. The preliminary timetable is as follows;
b. June 19, 2017 announcement of the contemplated merger.
c. End of August, 2017: Publication of merger prospectus.
d. September 12, 2017: EGMs of both companies.
e. November 1, 2017 or January 1, 2018, as possible: Expected completion of the merger.
f. Timing depends on the obtaining of necessary approvals by authorities.

14. Where and when is the merger decided upon?
a. The shareholders of YIT and Lemminkäinen will resolve on the merger at the companies' respective EGMs, which will be held preliminarily on September 12, 2017. The companies will publish the notices to their respective EGMs separately later.

15. What happens before the completion of the merger?
a. YIT and Lemminkäinen will continue as independent companies and have committed under the combination agreement to continue their business in the ordinary course of business.