The beginning of February marked the first anniversary of the merger between YIT and Lemminkäinen. The first year has been a time of integration and establishing a new corporate culture. As Jussi Nummi, EVP, Integration (and Strategy and Development) pointed out at the beginning of his presentation at our Capital Markets Day, approximately 17% of mergers and acquisitions are, according to international studies, considered to be successful. The most significant common factor in successful M&As is the speedy creation of a common corporate culture. This is why establishing a common corporate culture has been an important focus area for us during the past year, alongside our normal business.

We discuss our corporate culture and the values that form its core at every investor meeting. Investors have been universally satisfied with the fact that the President and CEO has personally met with nearly 2,000 YIT employees and spent a total of 25 working days visiting the Group’s units in all 11 countries in which we operate. The tools used to facilitate dialogue regarding the corporate culture included the OCAI method. The outcome was the core of our corporate culture in the form of our shared values (respect, cooperation, creativity, passion) and leadership principles. More information on the Group’s values is available here. 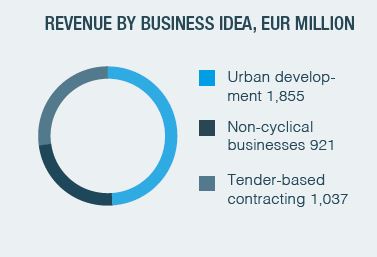 In conjunction with the release of our Financial Statements Bulletin for the past financial year, we also announced our guidance for this year. We estimate our revenue to be in the range of +5% to -5% compared to last year and our adjusted operating profit to be in the range of EUR 170–230 million. Our guidance for 2019 is based on factors such as the completion of the Mall of Tripla in the final quarter, the estimated timing of the completion of our current housing development projects and the Group’s strong order backlog. As there is considerable variation between quarters, we also intend to give an estimate for the next quarter.

During the conference call following the release of the Financial Statements Bulletin, analysts enquired about the rationale behind the guidance, aside from the estimated synergies. The President and CEO highlighted two drivers in particular:
1. Three of the Group’s segments (Housing Russia, Infrastructure projects and Paving) underperformed last year and we expect the measures implemented last year to produce positive results this year, leading to a significant year-on-year improvement in the profit performance of the segments in question.
2. The Mall of Tripla will be completed in the final quarter of the year. The project’s completion will lead to the recognition of revenue and operating profit in Business premises segment as well as the Partnership properties segment. One key piece of the equation is the Mall of Tripla’s planned fair valuation following its completion, instead of the cost-based measurement used to date. Another analyst on the conference call commented on the guidance suggesting that the Partnership properties segment might achieve a big improvement in profit performance. The President and CEO’s response was “That’s one good guess.”

March will be a busy month, with the Annual General Meeting on March 12 being the highlight. We will also organise an event for debt investors and analysts at Tripla early in the month. We will participate in a seminar on urbanisation, where Juha Kostiainen will deliver remarks on urbanisation from the perspective of construction and property ownership. In addition, the President and CEO will meet with all of the Group’s major domestic shareholders after the publication of the financial statements, as has been the Group’s custom for many years. We will also arrange road show events in Europe.

YIT’s Financial Statements and the Report of the Board of Directors as well as the Annual Brochure have already been published, please take a look!