After publishing the financial statements, we usually meet shareholders and potential investors in Finland and abroad. This year, we have not been able to travel abroad to the same extent as in previous years because it has been imperative to allocate management’s time in particular to merger-related issues. Preparations for the combined company’s strategy have been strongly on the agenda and the strategy is due to be announced in September this year.

Many international studies show that a unified corporate culture is one of the key factors in successful mergers. Creating a common corporate culture is now one of the current priorities of the management. That is why the management has allocated plenty of time for cultural discussions and workshops in our operating countries. The values of the merging companies, which were not so very different before the merger, and over one hundred years of history provide a good basis for the process.

Investors are keen to hear our views on the development of the Finnish economy and construction market. Is the peak of the cycle behind us or how do we see the market? Our answer is the same as in the investor news published on the morning of the Annual General Meeting: we see the year 2018 as bright. In the release (here), we gave our estimate of self-developed consumer sales in each country during the first quarter for both companies in a comparable manner. As regards CEE sales, it is worth noting that we have reported the projects sold to YCE Housing I Fund as investor sales. YIT is itself a co-owner of the fund with a 40% share, together with Ilmarinen and domestic private investment companies. YIT is also the main contractor and we handle selling the apartments (for a fee, of course). When a project is sold to the fund and reported as investor sales, no apartments have yet been sold to consumers. We explained this logic for the first time in the investor news published on the day of the General Meeting as we revealed our estimates on the residential consumer sales of projects sold to the YCE Housing I Fund for the current quarter: approximately 100 apartments (Q1/2017: 30).

In CEE; YIT has sold a significant amount of units to YCE Housing fund I and the sales has been reported as investor sales. The apartments are further sold to consumers. 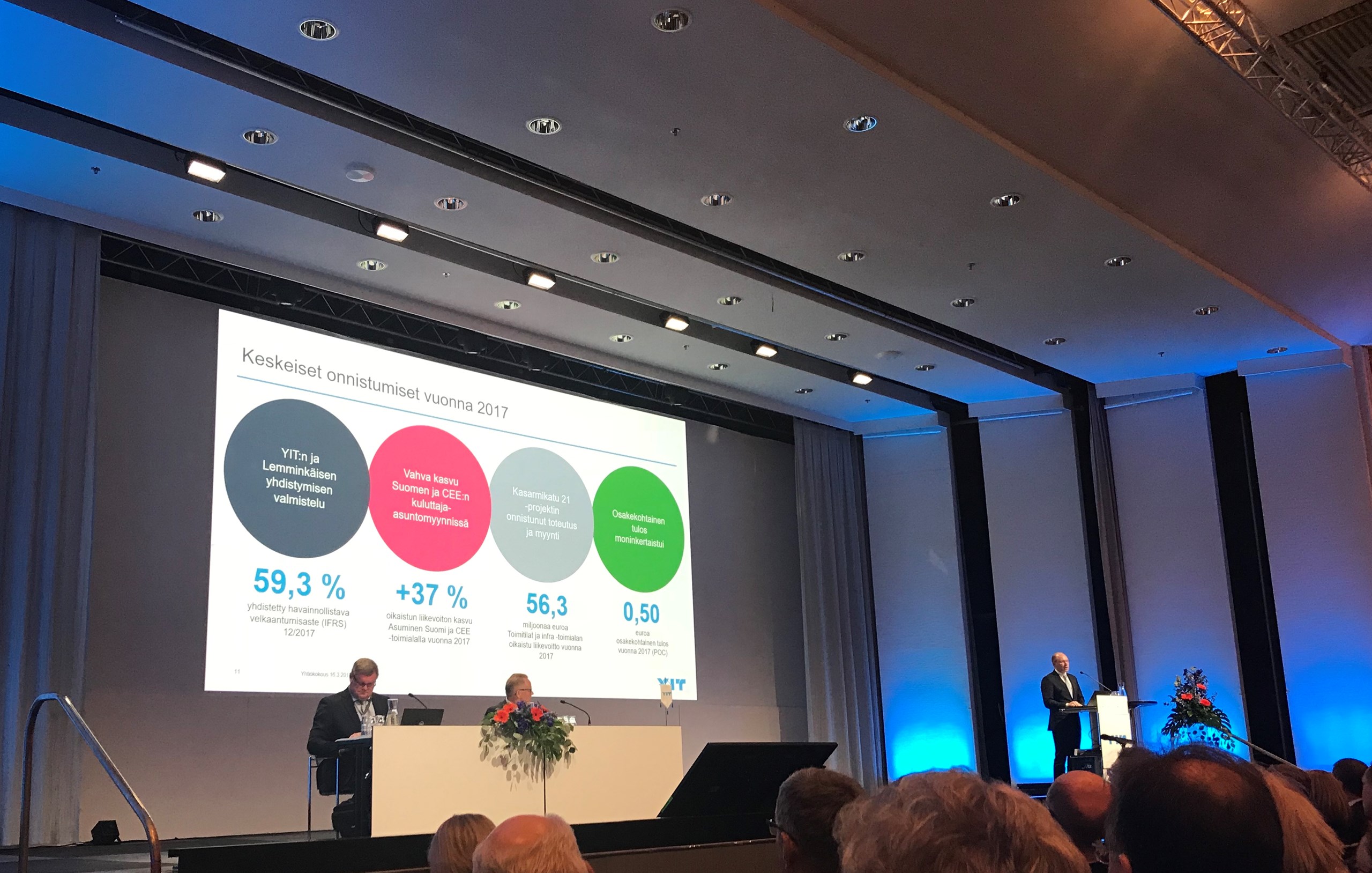 We are also facing new things when preparing the Q1 Interim Report: in the future, YIT will be reporting in accordance with IFRS principles. Up till now, the company’s main reporting method has been segment reporting based on percentage of completion (POC), which also has been the basis of our financial targets. The biggest difference between the two reporting methods is that, according to the IFRS accounting principles, revenue from residential projects for consumers is recognised upon completion and not based on multiplying the percentage of completion by the percentage of sale (such as in POC). For strongly self-developed housing segments we will continue to provide the most important POC-based key figures, such as revenue and operating profit, so that investors will be able to evaluate how our business is developing in the previous style.

And a reminder: as was mentioned in releases, the adjusted operating profit in the first quarter is expected to be low due to the normal seasonal variation and the low number of units being completed.

A concrete example of the synergy benefits?

As a company with a significantly stronger balance sheet, we also have the opportunity to refinance old loans and we believe to gain considerable savings of it.